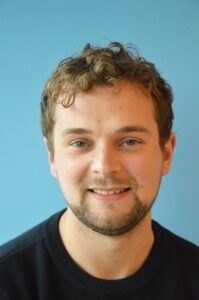 Florian Haans started his academic career in 2016 at the University of Twente where he enrolled in the bachelor of Technical Medicine. After completing the bachelor in 2019, he continued his study with the master program of Technical Medicine. During his master, he chose the specialization of Medical Imaging and Intervention. As part of his master program, he did several internships. During those internships, Florian was introduced to the DMRG group, as two of the internships were in collaboration with the DMRG group. The first internship in Maastricht, during the second year of his master, was focussed on developing and using MRS in combination with an MR guided navigator in order to correct for motion during scanning. During the second year of his master, he also did two internships at Radboud UMC, one focussed on placenta imaging, the other on automated real-time detection of organs on surgery videos. Additionally, the last internship during his second year was at Phillips in Best where he focused on using artificial intelligence to assist in planning of an MR scan. For his thesis, during the third year of his master, he returned to Maastricht. This time he focussed on developing a novel MRS method for detection of acetylcarnitine in the liver. During both internships in Maastricht he was supervised by Mijke Buitinga and Vera Schrauwen-Hinderling.

In November 2022, Florian continued his thesis project into the start of his PhD here at Maastricht University in the research group of Vera Schrauwen-Hinderling. His current project is a continuation of his master thesis, meaning he focusses on optimizing the MRS sequence to uncover acetylcarnitine in the liver and using it to study the differences in acetylcarnitine levels between healthy and (pre-) diabetic individuals.

This website uses cookies to improve your experience. We'll assume you're ok with this, but you can opt-out if you wish.Accept Read More